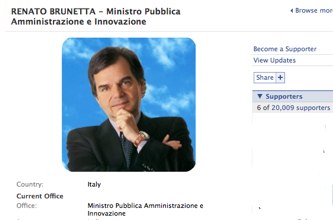 More and more Italian politicians have been jumping on the Internet bandwagon. The Education Minister Mariarosa Gelmini has started a YouTube channel, where she announces with a video that she hopes this channel will allow her to listen to people’s opinion, in order to “implement change together”. The video has reached 260,000 views since it was posted a week ago, and 8,000 comments. A few days ago, Renato Brunetta, the Minister for Public Administration and Innovation, has opened a Facebook page, gathering around 14,000 supporters and around 1,200 wall posts/comments. He also posts a video, in which he states that this is his first effort to reach people online, so that they can contact him with their views, and he hopes in this way he will also be able to keep them posted about his initiatives and activities.

Antonio di Pietro has been the first of Italian politicians to understand the power of the Internet for reaching a wider audience at a very low cost. He has an established blog, translated also in English, and has a pretty much established presence on Facebook – he has around 4,000 friends, has an official Facebook page with around 6,000 supporters and an unofficial one created by users with 10,600 supporters. Younger politicians, who are entering the political stage for the first time, have also been setting up Facebook pages to reach supporters at the local level. There are several groups for the main political parties and politicians, (all created by users). On its official website, the Partito Democratico has a ‘get involved page‘, which offers a YouTube like YouDem.TV and a PD network channel, but no official Facebook page. The Popolo delle Liberta’ official website offers links to YouTube (with 50 videos uploaded and a total of 8,000 channel views), a Facebook page (with around 1,500 supporters and 49 wall posts), Twitter (5 followers and 16 updates) and a Flickr page.

These scattered data, which certainly need a more systematic investigation, on the online presence of Italian politicians, pose more questions than answers. It seems very much that the model suggested and wished for is that of a direct democracy, see Brunetta and Gelmini’s introduction videos, in which by merely setting up an online presence it is hoped that magically a dialogue will ensue between voters, the public and the politician. Secondly, the models adopted resemble very much the old broadcasting models – top-down communication with the added bonus option of commenting. Some might argue that this feature is sufficient to enable citizen’s empowerement and voices. The fact remains, that if these online efforts are not matched by participation and dialogue on the ground field, then much more can be done in order to use the Internet effectively in the political process.