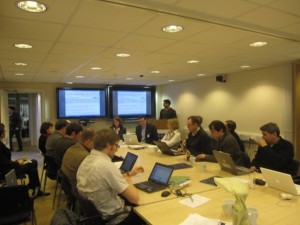 Day 1
Day one was opened by a public lecture by Matthew Hindman held at the Oxford Said Business School which explored how online audiences are distributed and how site traffic changes over time. The webcast of the lecture will be available online here.

Day 2
During day two we seeked to answer the broad question of why we should expect the Internet and new media to have an impact on democracy, and of how we can best develop research indicators to track democratic change. Session (1) asked what we can learn from national case studies; Bruce Etling & John Kelly presented their research on the mapping of the Russian blogosphere; Floriana Fossato presented a case study on whether the Internet is promoting political participation and civic engagement in Russia; and Alexey Sidorenko analyzed the role of the blogosphere and the Internet in fostering political participation in Poland.

(2) The second session asked whether the Internet helps foster civic engagement and how different methodologies can be used to try and answer this question; Corinna di Gennaro explored civic engagement and political participation amongst digital natives presenting results from focus groups; John Horrigan presented survey results from a new Pew study on the Internet and political participation, which will soon be released to the public; and finally Helen Margetts presented her research on how experiments can be used to measure the effects of information and Internet use on collective action.

(3) The third session focused on the Internet and elections. Ken Winneg presented his new results from the 2008 National Annenberg Election Survey (NAES) on the 2008 US elections; Thierry Vedel presented us survey data from the 2007 French Presidential Election; and Rachel Gibson gave us an overview and analysis of the current conceptual tools and theoretical frameworks used to study the Internet and politics.

The day concluded with a session (4) on the relationship between citizens and the state. Tobias Escher presented his research on how citizens can become involved online through MySociety projects and Stephen Coleman gave us a brilliant presentation on how the Internet can be used to augment citizens’ representation and the implications of this for political efficacy, deliberation, transparency and democracy.

Day 3
Day three of the workshop opened with (1) a very lively discussion of whether blogs and the blogosphere enhance democracy. Matthew Hindman explored how the US blogosphere has been changing between the 2004 and the 2008 elections; John Kelly and Bruce Etling gave us preliminary results from their study: mapping the Arabic blogosphere; and Mike Thelwall investigated how blogs react to mainstream news (and vice versa). This session was followed by a session (2) on civic engagement and online deliberation. Peter John presented his latest research on how experiments can be used to test how deliberation works online and Sandra Gonzales Bailon presented her research on the dynamics of political discussion and diffusion amongst online social network.

Lessons Learnt and Future Directions
The day concluded with a sum up discussion where we tried to draw conclusions on the state of current research in the field and future directions of research. The general agreement amongst participants after the three days of discussion was that the online world has been changing rapidly, and so have the tools and the methodologies which we are using to study these online phenomena, which have been becoming increasingly sophisticated over the past few years. The Internet is changing the ways in which citizens are able to participate in their political systems at a time when the media ecology is changing with traditional media such as newspapers declining and with blogs and bloggers increasingly playing a role in the spread of information and discussion. TV, however, remains still the prevalent medium through which people gather their political information, as several of the presentations we heard showed. However, the Internet has helped bringing into the process groups that traditionally have been marginalized in political participation such as young people and ethnic minorities.

There was unanimous agreement that the richness of different methodological approaches, from qualitative studies to survey work, to experiments and webmetric analysis is increasingly helping to map and make sense of the complexities of the online space and the complex relationship between the Internet and democracy. There was a general agreement that there are still many data holes, due to the difficulty for academics to gather data (compared to the easiness with which commercial companies can access and gather information about individuals’ use of the Web) rather than method holes. The stress was very much on the need for both over-time studies and inter-disciplinary research. Indeed, one common theme which kept emerging throughout conversations was the importance of context, i.e. the media ecology and the country specific situations which shape political engagement online, and hence the importance of comparative research. A caveat was raised on the importance of not forgetting those who are left offline when studying the democratizing effects of the Internet.

Finally, a great deal of discussion focused on the importance of asking social actors which are engaged online, from bloggers to citizens, how they themselves are making sense of what they are doing online, a point made by Stephen Coleman which was picked up many times during presentations, in order to avoid making normative assumptions from researchers on how the Internet should be shaping democracy. As our work at Berkman on Digital natives shows, there are different creative ways in which digital natives become civically engaged online, which often are not covered in political scientists’ classical definitions of what is meant by ‘political participation’, thus showing that we need to broaden the way political participation is conceived in traditional studies of civic engagement in order to measure how the Internet is fostering participation.

All in all it was a great workshop and we thank all participants for their sophisticated research and insights on this topic. Please keep checking our Internet & Democracy website and our blog in the upcoming weeks for further materials and updates on this workshop.

2 Replies to “The Internet and democracy: lessons learnt and future directions of research”