A forthcoming study by Hua Wang (USC Annenberg School for Communication) and Barry Wellman (University of Toronto) “Social Connectivity in America” has looked at how social networks of friendship have been changing from 2002 and 2007 and how this is related to different levels of Internet use.

The study was prompted by fears that Americans have been becoming increasingly disengaged from public life and disconnected from their peers as exemplified by the work of Harvard political scientist Robert Putnam’s on social capital “Bowling Alone” (2000), who blamed television as the main culprit for the breaking up of the texture of American social and political life.

What Wang and Wellman find – via an analysis of two American national surveys of Internet adoption and use, from the World Internet Project – is that networks of friendship amongst adult Americans aged 25-74 remain abundant and in fact they have been growing between 2002 and 2007. In addition, they found that this trend was similar amongst non-users of the Internet, light-users, moderate users and heavy users – dispelling the initial idea that the more time you spend online the more likely you are to become socially isolated and even develop depression. In fact, the study also found that heavy users of the Internet were particularly socially active, having the highest number of friends both online and offline. END_OF_DOCUMENT_TOKEN_TO_BE_REPLACED

[live blogging] My friend and colleague Lokman Tsui (@lokmant) is talking today at the Berkman Center about his current research:  Beyond Objectivity: Global Voices and the Future of Journalism.

Global Voices is “a community of more than 200 bloggers around the world who work together to bring you translations and reports from blogs and citizen media everywhere, with emphasis on voices that are not ordinarily heard in international mainstream media”. Why does this matter? The title of Lokman’s personal blog says it all: “Global Voices, One World”. Strangers can gather and discuss (the news) and form a public. Now with the Internet you have strangers you can connect to potentially everywhere. Habermas’ public sphere of coffee houses, Anderson’s notion of ‘imagined communities’ capture well this agora formed by online communities. Looking at how the Internet is destroying journalism is a one sided interpretation. The Internet offers new opportunities, a globalisation of culture. END_OF_DOCUMENT_TOKEN_TO_BE_REPLACED 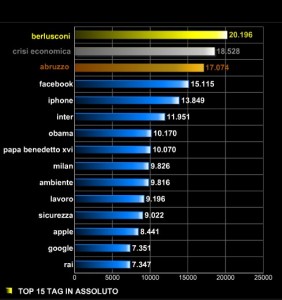